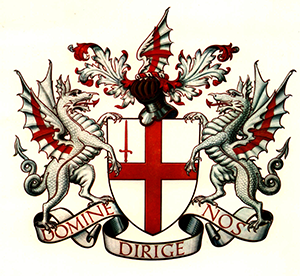 THE CITY OF LONDON AND THE WORSHIPFUL COMPANY OF CARMEN

From time immemorial the City of London Corporation has exercised a right of jurisdiction over carts within this City, although from time to time the powers of licensing have been delegated by the Corporation to the Worshipful Company of Woodmongers or to Christ’s Hospital.

The number of carts plying for hire within the City was limited by an Act of Common Council in 1681, so that “... all streets and lanes of the City may not be pestered with carrs and carts and His Majesties Liege People have free passage by Coach or otherwise.” This Act set the number of carts to be licensed by Christ’s Hospital at 420 and enacted that the carts so licensed should be marked with the City’s Arms on the shafts and numbered on a brass plate. The number of vehicles was increased to 600 in 1835.

An Act of Common Council in 1838 repealed all former acts and the Keeper of the Guildhall was empowered to “... mark carrs and carts for the purpose of standing and plying for hire within the streets of the City provided the owner is a Freeman of the City and a member of the Fellowship of Carmen. All carrs and carts so licensed are required to be brought to Guildhall annually to be marked.”

A number of places within the City were approved as standings for carts plying for hire and these were approved and regulated by the Court of Aldermen.

At the end of the 19th century 111 licences were in force, held by 16 Carmen and there were 89 cart standings. After that date the number of carts drastically declined and from that time the Court of Aldermen reduced the number of stands.

In 1965, the Commissioner of Police for the City of London advised that the remaining cart stands, of which there were 18, had long been unused and their existence was in conflict with the provisions of Parking Zone regulations.

The Carmen’s Company was consulted. They requested that the marking of carts continue to take place and a cart stand be permitted on one day a year at one point in the City in connection with an annual ceremony to be held by the Company. The City Corporation agreed, and the Commissioner of Police was asked to arrange, in consultation with the Carmen’s Company, for one cart standing on one day per year at Dowgate Hill.

Guildhall records show that in 1981 the Keeper of the Guildhall reported to Committee that the annual Cart Marking had taken place at Guildhall on 6th August when “... 4 carts were marked and afterwards, the party retired to a local hostelry.”

Since this occasion the Carmen have developed the event which is now popular with the Livery and the public. In 2017 there were 56 entries for Cart Marking, the largest number of vehicles marked on record, to celebrate the 500th anniversary of the foundation of The Worshipful Company of Carmen.